For International Women’s Day 2019, we are celebrating the power of collective action and reflecting on the achievements of Australia Awards alumni in South and West Asia who are driving gender balance. This is the story of Anusha Nishanthi from Sri Lanka who is promoting governance through Compliance Risk Management in Sri Lanka.

Australia Awards alumna Anusha Nishanthi is dedicated to implementing a strong regulatory framework on finance and banking, with a focus on compliance, risk management and governance.

As the Group Head of Compliance with NDB Capital Holdings, Anusha can see how her work results in a positive contribution for both the private sector and the people of Sri Lanka. ‘Australia and my Australia Awards Scholarship were definitely the starting point of my career,’ says Anusha, who always dreamt of becoming a commercial lawyer.

After completing her secondary education, Anusha completed her undergraduate law degree at the University of Colombo and went on to become an apprentice in a law firm, as an Attorney-at-Law. However, her heart was still set on becoming a commercial lawyer and she was particularly interested in financial markets. With this in mind, she joined the Investigation Division of the Securities and Exchange Commission of Sri Lanka (SEC) – the regulator of capital markets.

Before long, she applied for an Australia Awards Scholarship. Anusha’s application was successful, and she studied a Master of Commercial Law at the University of Melbourne, which she says ‘had a reputation as Australia’s best law school’. It was a life-changing opportunity. ‘My hometown is Pollonaruwa, a village far from Sri Lanka’s capital city,’ says Anusha.

‘Thanks to Australia Awards I not only got the chance to leave the country for the first time, but also had the opportunity to experience and adjust to a more cosmopolitan lifestyle.’

While in Australia for her Scholarship, Anusha also took part in a Leadership Program ‘add-on’ offered to outstanding Australia Awards scholars. Through this Program, she had the opportunity to travel to different Australian cities to take part in workshops and seminars. She also received the opportunity to undertake an internship. After completing her internship at Victoria University, she was asked to stay on and complete a Doctorate, but decided it was time to return home.

After returning from her studies in Australia, Anusha worked with two different finance groups, fulfilling duties as the Group Legal Officer at one and as the Head of Legal and Compliance at the other. She also delivered some guest lectures on ethics at the SEC for students undertaking the Certificate in Capital Markets program of the SEC to become Registered Investment Advisors. In addition, she helped draft the Code of Conduct for the Colombo Stock Brokers Association.

Now, Anusha is Group Head of Compliance with NDB Capital Holdings. In her role, Anusha ensures that all six companies within the NDB Capital group comply fully with capital market transactions—and there are no violations of government legislation/regulations.

‘Unfortunately, some companies in Sri Lanka do not always follow the rules relating to their responsibility to their stockholders… [they need to] build a comprehensive and dynamic framework and methodology to identify their compliance risks,’ she says.

When appointed, she was the first Group Head of Compliance within the organisation and so she had to draft policies, operating frameworks and report structures to ensure that the company and its personnel adhered to Sri Lankan law. Anusha’s supervisor, Vajira Kulatilaka, CEO of the NDB Investment Banking Cluster, says, ‘Her area is a specialised one. She does her job well, particularly because she is confident about her knowledge and skills—and she successfully links that confidence to her expertise. She is a very good role model for Sri Lankan women. We need more specialists [like her] in Sri Lanka.’ 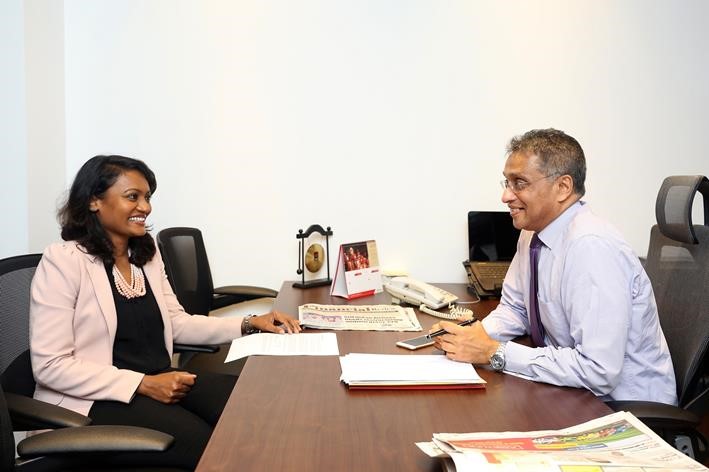 NDB Capital has worked with Australian parties on transactions in the past, and Anusha can see the potential for her organisation to develop even stronger partnerships with Australians and Australian companies. She recently contacted the University of Melbourne law school to offer her support as an international alumna in establishing linkages with the university, and offered to deliver some guest lectures when she is in Australia. Anusha also writes articles on compliance and governance matters as a guest columnist in the Daily Financial Times – the premier financial magazine in Sri Lanka.

In the little spare time she has left over after her demanding job as Group Head of Compliance, Anusha is keen to write a book on compliance with particular relevance for Sri Lanka. ‘It will be the first such book in Sri Lanka, and even though I’ve already written a few chapters, I still have a lot to write,’ she says.

‘My book will definitely contribute to a greater understanding of the need for financial compliance here in Sri Lanka and [will therefore] contribute to greater transparency in the industry and for the government,’ says Anusha.

When she is not busy drafting her book and ensuring compliance for NDB Capital Holdings’ companies, Anusha finds time for community service and supporting the non-government organisation she established, which aims to support students and women in Sri Lanka’s rural areas.

Anusha is a former President of the Sri Lanka Association of Australia Awards Alumni and has greatly contributed to the success of the alumni association. Some of the projects implemented during her term as President included the International Conference on Compliance Trends for Financial Institutions 2018 & Beyond – the first ever compliance conference of its kind to be held in Sri Lanka – and the Book Drive project, an initiative that built libraries for five rural schools.

Anusha has also been awarded a Community Service Award from the Institute of International Education in the United States.