Australia Awards alumnus Dr. Kalana Maduwage is leading the way on snake venom research in Sri Lanka, where he works to improve the diagnosis, management and treatment of snakebite victims.

An academic, inventor and naturalist, Dr. Kalana Maduwage’s fascination with reptiles began in childhood. At the age of 18 he developed his first patent: a novel technique for projecting microscopic slides. As a result, he was named Young Scientist 2005 by Sri Lanka’s National Science Foundation, and won the presidential award for Best New Invention later the same year. 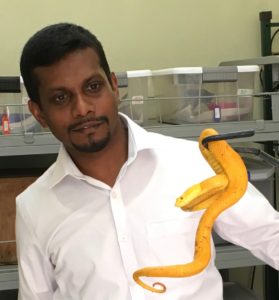 In 2007, he completed his MBBS (Bachelor of Medicine, Bachelor of Surgery) at the University of Peradeniya, achieving distinctions in parasitology and pathology. During his medical degree, he described* his first new species of reptile, a previously unknown lizard from Sinharaja rainforest, and published his first indexed journal article.

After completing medical school, he obtained a further two patents for new inventions and went on to spend his pre-internship year in the laboratory of Rohan Pethiyagoda, one of Sri Lanka’s leading naturalists and a taxonomist on freshwater fish of Sri Lanka. This involved months of fieldwork across Sri Lanka and India, where he discovered 12 new species of freshwater fish and three new species of snakes. The description of three new Asian freshwater fish genera was another major contribution to biodiversity research during this period.

Dr Maduwage was then awarded an Australia Awards Scholarship to fund his PhD candidature at the University of Newcastle, providing him with intensive training as a future leader in the field of medical research.

Dr. Maduwage obtained his PhD in clinical pharmacology in June 2016. The development of a rapid test to diagnose snake envenoming was a landmark discovery in his research career, winning awards for the best scientific discovery in Newcastle and New South Wales by the John Morris Scientific Award for medical research.

The research undertaken by Dr. Maduwage has won many accolades such as the Australian Society for Medical Research Award 2014 and the Informa Healthcare Award 2014 from the North American Congress of Clinical Toxicology, USA. In 2016, he was a Global Young Physician Leader, awarded by the Intra Academy Medical Panel and the World Academy of Sciences in Germany.

Dr Maduwage’s research findings have transformed the understanding of the effects of snake venom in the human body. In a recent publication, he explored the effect of Indian anti-venoms for Sri Lankan snakebites and their lack of effectiveness, highlighting the need for the development of anti-venoms specific to Sri Lankan snakes.

He is an active member of many national and international scientific associations, including the Asia-Pacific Association of Medical Toxicology, the Australian Society for Medical Research, the International Society of Toxinology and the Viper Specialist Group of the International Union for the Conservation of Nature.

Dr. Maduwage is grateful for the support of Australia Awards in achieving his PhD and the role his Scholarship played in developing his leadership skills. He believes that the completion of his PhD is a great asset for him to contribute to his country in regard to the generation of knowledge on snakebite management.

He continues his research on snake venoms to better understand the exact nature of these toxins, seeking to improve the diagnosis and treatment of snakebites in Sri Lanka.

*A species description is a formal description of a newly discovered species, usually in the form of a scientific paper.