Ms. Helen Samarasinghe, currently serving as the Council Secretary of the Uva Provincial Council, Badulla, returned from Australia in 2003 with a Masters in Development Administration from the Australian National University (ANU), under the Australia Awards program. 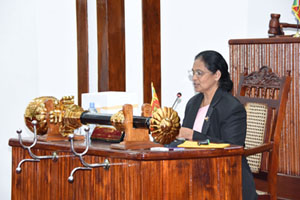 After returning from Australia, she was appointed the Secretary to the Provincial Public Service Commission (Uva) where she headed the recruitment, appointment, promotions, disciplinary inquires and administration of all Provincial Public Service staff of the province. The overall staff strength is nearly 34,000. She said the skills she gained from her Masters studies were a significant support for her to maintain an accountable, transparent and credible delivery of her duties in this position.

Ms. Samarasinghe adds that the skills and knowledge she gained in Australia and her participation in a professional leadership program in particular, gave her the confidence and inspiration to design and introduce new initiatives to improve systems and processes in the organisation.

While serving as Deputy Chief Secretary (Personnel and Training) at the Office of Chief Secretary, Uva Provincial Council, she initiated a Productivity Awards Competition, which contributed to the improvement of productivity among public institutions and departments. Her initiative became a model for other provinces to follow.

One of her personal projects was to upgrade a marginalized school in Badulla District with her staff. Together they raised funds, established a preschool and, on a volunteer basis, renovated the school. In just three years, the number of children in this school increased from six to 48. Ms. Samarasinghe says that such activities not only contribute to the development of the rural areas, but are also personally fulfilling.

In her opinion, Australia Awards serves its purpose in contributing to national and human development in Sri Lanka. Ms. Samarasinghe’s work in Uva Province focuses largely on rural development and addressing problems at the grassroots level. The subjects she chose at ANU were relevant to her field of work and provided her with skills, knowledge and an outlook that have allowed her to excel at the local government level.

Ms. Samarasinghe cites that her studies in Australia have made an overall impact on her work performance back in Sri Lanka. She says that the knowledge she gained in Australia has given her confidence in decision making and led her to provide service to the people with much vigour.