Indika Sigera has a long history working in the maritime field. In 2002, he received a Masters degree from the World Maritime University in Malmo, Sweden after which he worked as a Tanker Charterer with Ceylon Petroleum Corporation. In 2006, he became a lecturer at the Department of Transport and Logistics Management at the University of Moratuwa. In 2007, he was awarded an ALA to undertake a PhD at the Australian Maritime College, an institute of the University of Tasmania. 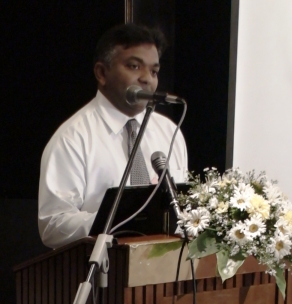 Indika Sigera presenting findings from one of his research papers

His PhD thesis was the Contribution of Intangible Resources to Post Consolidation Success of Container Lines. To foster links between Australia and Sri Lanka, Indika organised a seminar in collaboration with Australian Maritime College, University of Moratuwa, Sri Lanka Port Authority and Chartered Institute of Transport and Logistics Sri Lanka Branch. More than forty senior leaders in the maritime industry attended the event, including Dr Stephen Cahoon (Head of Department of Maritime and Logistics Management, Australian Maritime College), Professor Amal Kumarage (Head of Department of Transport and Logistics Management, University of Moratuwa), and Mr Nihal Kappetipola (Managing Director of Sri Lanka Port Authority) who made presentations.

Indika made several international presentations while on scholarship, based on his research. In July 2010, a joint paper, The contribution of intangible resources to the competitive performance of container lines: perspectives of senior managers in Sri Lanka was presented at the International Association of Maritime Economists (IAME) conference in Lisbon. In December 2010, a second joint paper, Integrating intangible resources in strategic co-operations of container lines: Ship agents’ perspective, was presented at the Asian Logistics Round Table & Conference 2010 in Antwerp. In October 2011, a third paper, Processes adopted to integrate intangible resources in global acquisitions among container lines: Perceptions of acquirers and the acquired, was presented to the 2011 IAME conference in Santiago, Chile.

On completing his studies in December 2011, Indika returned to the University of Moratuwa where he is developing port management and shipping management programs at undergraduate and post graduate levels.