Jayananda Jayasundera was an Assistant Secretary in the Sri Lankan Public Service Commission when selected for an Australia Award for Development in 2010; the only applicant from the Commission selected for an AusAID funded Australia Award for Development in that year. He wanted to complete a Master of Public Policy to contribute better to his job and to Sri Lanka more broadly. He believed this would be best achieved through a program with a multinational focus, which he found in a course offered at the University of Melbourne.

Jayananda faced challenges when he arrived in Australia. It was so different from his home country and although his family was with him, he missed Sri Lanka. Finding long term accommodation was difficult and he spent much time searching on-line and meeting real-estate agents. Fortunately he was supported in these early days by AusAID’s Liaison Officer and a mentor from the university who helped him adjust to student life in Melbourne. 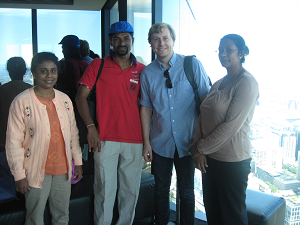 There were a couple of events in those early weeks that helped him and his family adjust. The first was an informal, social meeting with the university Pro-Vice Chancellor where he met other Australia Award scholars from China, the Middle East and Asia. Like him, they were also adjusting to the Australian culture and he no longer felt so alone. Then there was Australia Day, with fireworks and people celebrating Australia’s birthday just like the festivals back in Sri Lanka.

Gradually he and his family became more adventurous. One memorable experience was visiting the highest viewing platform in the Southern Hemisphere, the Eureka Skydeck. On the Skydeck they experienced amazing views of the city of Melbourne, standing 88 floors above the ground, looking down on people on the footpath who were the size of ants. Within a couple of weeks of starting his IAP, Jayananda felt comfortable, both academically and personally.

He believes his study experience in Australia will help his critical thinking and better prepare him to contribute to Sri Lanka’s development when he returns. He wants to make the most of his Australia Awards for Development.