Australia Awards alumnus Saliya Jayathilaka is using the knowledge and skills he gained through his Scholarship to make a difference in Sri Lanka’s public sector. He has contributed through multiple high-level roles he has held in different government ministries since 2016.

Saliya was always keen to pursue a master’s degree at an Australian university, due to the country’s reputation as one of the best international destinations for higher education. After completing a Master of Development Practice at the University of Peradeniya in Sri Lanka, Saliya began working in the public sector in the Anuradhapura district. There, he learnt about Australia Awards from his colleagues, who told him about the impact the Scholarship had had on their lives and careers. This motivated Saliya to apply for an Australia Awards Scholarship, which he received in 2015 to pursue a Master of Public Policy in International Policy at the Australian National University (ANU) in Canberra.

Travelling to Australia, Saliya was struck by how friendly the Australian people were. He recalls the welcoming nature of the Student Contact Officer from ANU, which immediately made him feel secure even though he was in an unfamiliar country.

Saliya lived at the university’s Toad Hall, a residential hall primarily for postgraduate students, during his two years of study. This accommodation gave him the opportunity to form networks with other students. “I made friends from several countries. I learnt their languages, how they greet others and even some songs from their countries,” he says. He also fondly remembers attending the National Multicultural Festival on Australia Day, which was an unforgettable event for him.

The coursework was challenging, but Saliya found the resources available for Australia Awards scholars helpful, enabling him to complete his course successfully. During his studies, Saliya attended several national and international conferences, where he was able to present his research papers. These conferences included ANU’s Student Research Conference in Canberra in July 2015 (research title: State, the strongest player in contemporary governance), the 4th National Graduate Institute for Policy Studies (GRIPS) Student Conference in Japan in September 2015 (research title: Role of the State in contemporary governance), and the Public Policy Network Conference held at the University of New South Wales in January 2016 (research title: Does an electoral quota for women undermine the democratic legitimacy of parliamentary representation: A case study from Sri Lanka). He describes these as “once-in-a-lifetime opportunities”. 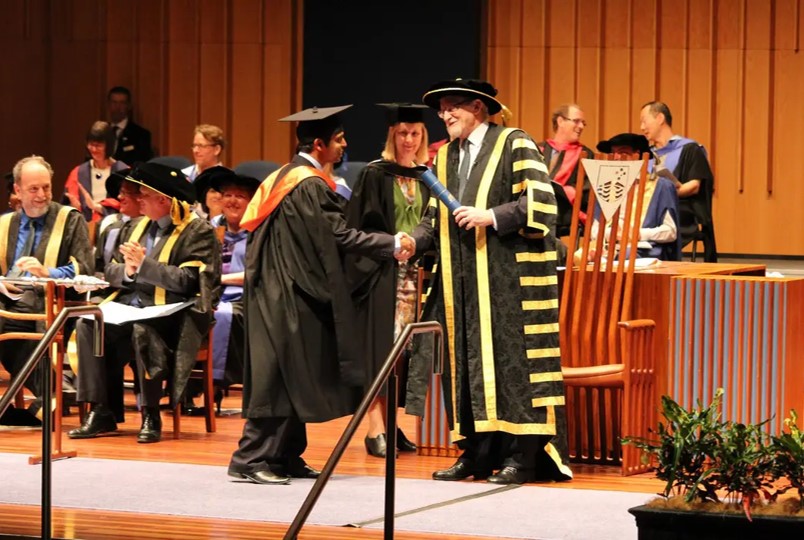 Saliya during his graduation ceremony at Australian National University in 2016.

Saliya ensured he maximised his Australia Awards experience by engaging in relevant extracurricular activities. He volunteered as a coordinator and was instrumental in organising the Asian Studies Association of Australia’s 2016 Biennial Conference, held at ANU. He was also a member of the ANU Postgraduate and Research Student Association and part of the Executive Committee of the ANU Crawford School Students’ Society.

“My Australian experience has propelled me to a different level of thinking, and I have grown both professionally and personally,” Saliya says. “The overall experience showed me that higher standards can be achieved as an individual and as a country, if one chooses to accept change.”

After returning to Sri Lanka in December 2016, Saliya was appointed as an Assistant Director at the then Ministry of Development Strategies and International Trade, where his responsibilities included working on policy formulation, reform and implementation. He also coordinated stakeholders and technical assistance for various economic, innovation, investment and entrepreneurship projects, including projects funded by the World Bank, Asian Development Bank, Japan International Cooperation Agency and McKinsey & Company. Additionally, he managed investment promotion initiatives in multiple sectors and government-to-government projects with Japan and India.

In 2020, he was transferred to the Ministry of Labour, where he was appointed as the Acting Director (Development). In this role, his duties included formulating, implementing, monitoring and evaluating relevant policies, programs and projects. In addition to his regular duties, Saliya carried out supplementary activities as the Director General of National Institute of Labour Studies, where he worked on various initiatives, such as applying expenditure management techniques. His efforts assisted the institute to become a profitable entity.

He currently works as the Assistant Secretary (Development) at the Ministry of Power and Energy, engaging in crucial reforms related to the power and energy sector of Sri Lanka.

Saliya actively participates in Australia Awards alumni engagement initiatives. He served as the Assistant Secretary to the Sri Lanka Australia Awards Alumni Association (SLAAAA) in 2018, through which he was able to contribute towards initiatives such as a book drive (establishing libraries for rural schools in Kurunegala, Batticaloa and Polonnaruwa) and a tree planting program. He was also involved in establishing the North Central and Central provincial chapters of SLAAAA and supported in organising its international conference on ‘Compliance Trends for Financial Institutions 2018 & Beyond’ in 2018.

He participated in the 2018 Regional Alumni Workshop, which had the theme ‘Champions for the Environment and Climate Action’, as part of a group with fellow Australia Awards alumni Nishadi Liyanage, Dr Randika Jayasinghe and Dr Pradeepa Jayaratne. Their project ‘Cradle to Cradle: Empowering schoolchildren to be catalysts for preserving the environment and tackling climate change’ was judged the second runner-up at the Workshop, which was held in Thimpu, Bhutan. 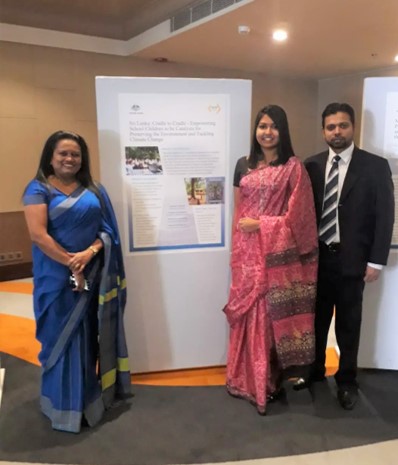 Saliya with fellow alumni Nishadi Liyanage and Dr Pradeepa Jayaratne at the Regional Alumni Workshop in Thimpu, Bhutan in 2018.

In 2021, Saliya and fellow Australia Awards alum Rusitha Dhamrasena received an Australia Awards small grant to implement an information system to improve the efficiency and effectiveness of the human resources functions of the Sri Lanka Administrative Service. This improved system has been implemented and provides an accessible interface that links together all public sector organisations that carry out human resources functions in Sri Lanka.

Saliya greatly values the support and knowledge he gained through Australia Awards and remains in touch with the friends and connections he made during his time in Australia.