Australia Awards alumnus Saravanapavan Gowripalan is contributing to waste management and sustainable development in Sri Lanka. Gowripalan works with the Department of Local Government as the Provincial Engineer for the Eastern Province. In this role, he oversees the design and construction of all types of engineering work, including waste management, water treatment, roads, construction of buildings and work in public areas such as parks. He also oversees the monitoring of all technical work in the province.

Gowripalan completed a Master of Environmental Engineering at Western Sydney University in 2017 with the support of an Australia Awards Scholarship. “My Australian exposure added greater value to my existing engineering knowledge,” Gowripalan says of his study experience.

“More than just the theories we were taught, I could learn more about practical engineering by observing and acquiring Australian architectural concepts.”

“Although the Sri Lankan education system provides students with knowledge and theories, the difference in Australia is they are more practical based, especially in the field of structural engineering.”

Gowripalan is a passionate advocate of lifelong learning. Before receiving his Australia Awards Scholarship, he had already gained undergraduate qualifications in civil engineering, and postgraduate qualifications in geotechnical engineering, sociology and public administration. He applied for an Australia Awards Scholarship because he was unable to identify appropriate postgraduate courses in environmental engineering in Sri Lanka.

As well as being drawn to the course subject matter, Gowripalan was eager to live in a multicultural country such as Australia. He was accompanied to Australia by his wife and two children, aged 12 and 10 at the time. He wanted his family to experience life in Australia to expand their knowledge about the world.

Gowripalan says that his Australian education not only broadened his knowledge, but also made him more confident. “My self-confidence was low before my Australia Awards Scholarship, mainly because of the way I had been brought up in the local context. Now, I am confident enough to talk with other development professionals working in the area and can convince them of the best solutions for addressing existing development issues in the province,” he says.

Recalling his time spent in Australia, Gowripalan values the opportunity he received to network with people from different countries, including other professionals in his field. He also enjoyed experiencing all four seasons of the year in the southern hemisphere and visiting tourist attractions with his family.

Gowripalan is currently working as a Project Engineer on two projects: the Rural Bridge Project and the Local Government Support Project, which are both being implemented by the Chief Secretary offices of the Eastern Province. Through the knowledge he gained from his Australian and Sri Lankan education, he has been able to introduce several innovative solutions to local environmental challenges.

“I studied areas such as waste management, waste segregation and water purification when I was in Australia, and I am now applying the knowledge from these courses in my day-to-day work in the three districts that I am supervising,” he says.

Gowripalan explains that pesticides have contaminated groundwater in Sri Lanka for many years. He developed a solution to treat a polluted water source near a paddy field in the Ampara District by using activated carbon to remove pesticides. As a result, water that was previously unfit for drinking is now suitable for human consumption. In addressing this challenge, Gowripalan sought the advice of his previous supervisor at Western Sydney University, Professor Satha Sathasivam, to ensure that the solution would be effective.

To address pollution and waste issues in the province, Gowripalan is currently working on a project to construct roads using plastic waste. He has identified the necessary technology and is planning to implement this solution in Trincomalee District. He is also working on an innovative process involving pyrolysis, the thermal decomposition of materials at high temperatures in an inert atmosphere. It involves a change of the materials’ chemical composition. “You can burn plastic without oxygen and produce bio-diesel and carbon monoxide. When the Asian Development Bank called for experts in the Eastern Province to suggest ideas to promote renewable energy for one of their projects, I proposed this idea, and they accepted my proposal,” he says. 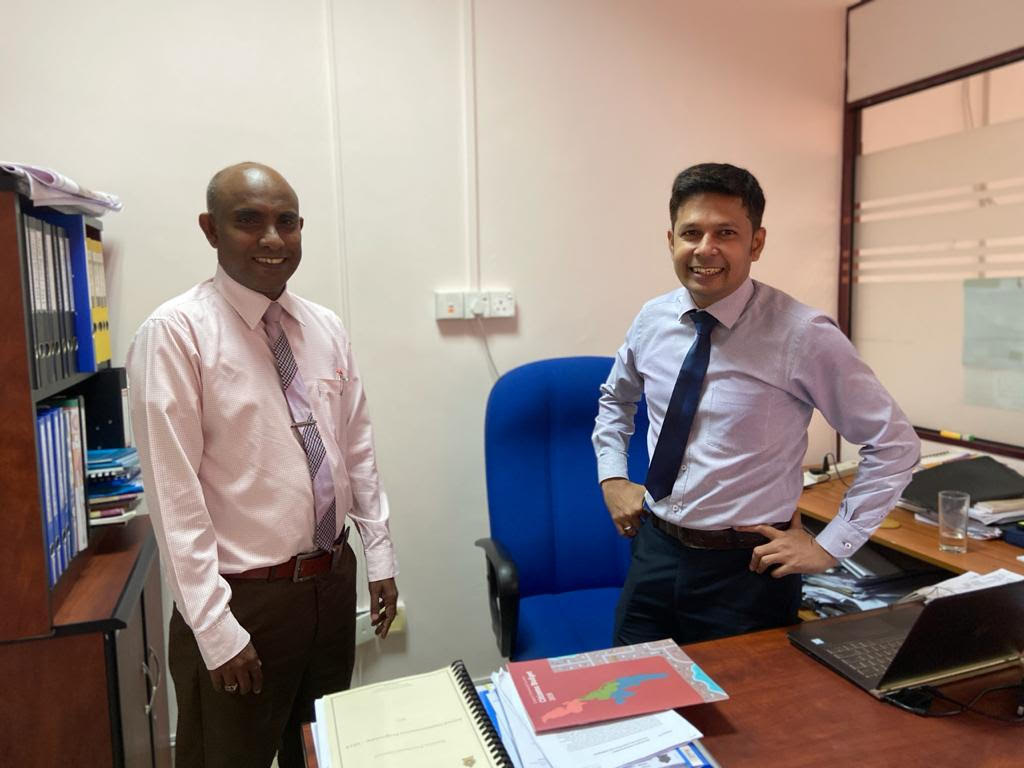 In addition to his professional roles, Gowripalan holds various advisory positions, through which he provides technical advice and training to professionals on topics such as waste management, construction and sustainable development. For example, the Sri Lanka Institute of Local Government utilises Gowripalan’s expertise on their approaches to solid waste management. He is also a recognised resource person for the Construction Industry Development Authority, providing training in solid waste management for government officials and contractors involved in the construction industry to promote ‘Green Building’. Furthermore, he is an Associate Professional with the Green Building Council of Sri Lanka and has reviewed and provided comments and observations on the ‘Clean Water and Sanitation’ section in Sri Lanka’s Voluntary People’s Review of the Sustainable Development Goals in 2018.

Gowripalan feels a responsibility to use the skills and knowledge he has gained from Australia Awards for the benefit of all Sri Lankans in order to ‘repay’ his country and Australia for the extensive education he has received. To this end, he applies his expertise widely. In addition to his role as Provincial Engineer, he has identified and implemented a number of environmentally impactful projects. For example, he secured World Bank funding to undertake a drinking water project and solid waste management project in the eastern districts. He has also implemented a range of water supply projects and waste management projects—such as compost centres, night soil treatment plants, waste centres and biogas plants—with funding from donors. In addition, Gowripalan has established his own blog to share his knowledge on a diverse range of subjects.