Meet Wasantha Paluguswewa. He is helping revitalise Sri Lanka’s 2,000 year old irrigation system with the knowledge he gained during his studies in Australia under an Australia Awards Scholarship. His work is improving thousands of people’s lives across the country’s harsh dry zone. 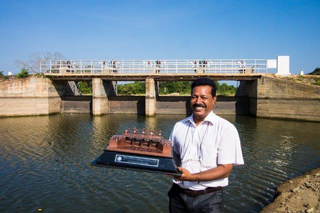 In the remote village of Elapotana, for the first time since local farmers can remember, they are now able to cultivate rice twice a year instead of only once, thanks to a new steady stream of water.

“Water was the main problem here,” says young father of two, Nalaka Wimalasiri. “I have 2 and a ½ acres but I couldn’t make enough money, so I left my village in 2009,” he explains. To make ends meet, Nalaka worked as a labourer on construction sites and as a security guard in the faraway capital, Colombo. With only two days off every quarter, he rarely saw his wife and children.

Around the same time, Australia Awards Alumnus, Wasantha Paluguswewa, returned from his studies in groundwater hydrology at Flinders University in South Australia to take up his new position as Director of Irrigation in Anuradhapura – the commercial centre of Sri Lanka’s dry zone and Wasantha’s hometown.

Ancient civilisations tamed this harsh part of the country by building a sophisticated irrigation system. A network of more than 14,000 village tanks and canals captured and stored rainwater during the wet season and then slowly released it, providing a vital lifeline to farmers and ecosystems during the long dry months. 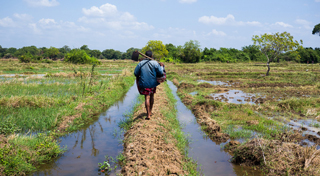 Farmers rely on effective irrigation systems to grow their crops

This system was so well conceived that for thousands of years people continued to use it. But, in recent decades the tanks have gradually fallen into disrepair, while the demand for water has grown along with the population and local industry.

With neglect, the tanks silted up – storing increasingly less water and no longer recharging the groundwater. Water levels in wells dropped. Shortages and poor water quality became a way of life. The region also began seeing an inexplicably sharp rise in a new form of kidney disease, which mostly affected farmers (90%).

“The scholarship gave me a lot,” Wasantha says. “In our universities we don’t have specialised subjects in groundwater and Australia is a world leader in this field,” he says.

Through his studies, Wasantha realised that recharging the groundwater was vital for maintaining an adequate year-round supply and for improving water quality. This could be achieved by ensuring that a certain amount of water is retained in the old tanks at all times, and this meant repairing and improving the storage capacity of tanks that now needed to meet a much greater demand.

Under Wasantha’s leadership, hundreds of dilapidated tanks across the dry zone were de-silted, their bunds raised and repaired to increase storage capacity, and the idea of ‘dead storage’ was also re-introduced. “The ‘dead storage’ is water that cannot be taken out of the tanks,” explains Wasantha, “and it is this water that slowly, but steadily seeps into the earth, recharging the groundwater”.

The ancient kings of Sri Lanka, who had originally built the vast irrigation system that spans across the dry zone, had also used this technique. “One thing we have noticed is that there is an optimum water level which we need to maintain in the tanks all year round, that is the level which the environment needs,” Wasantha explains.

Together with irrigation department officials, village water management committees are responsible for monitoring levels in the tanks and distributing this valuable resource sustainably throughout the year.

In the village of Elapontana, every morning at 10am it is Wigtha Samaranayake’s job to measure the local tank’s water level. As part of the rehabilitation effort in this area, this village tank was de-silted, repaired and connected via canals to a water catchment upstream. Now the village has a reliable water source, which has changed many people’s lives for the better.

Wigtha says they are now able to cultivate rice in two seasons instead of one, and he hopes that the resulting extra income will enable him to break the cycle of borrowing cash to sow his paddy. “We have hope for the future because if we are only using our own money, we have nothing to lose,” he says. “Before we used to pawn our possessions or give the deeds to our land as a guarantee for a loan. If the harvest was bad we could lose everything. Now we have nothing to lose. Now we have a big, bright, hopeful future,” he beams. 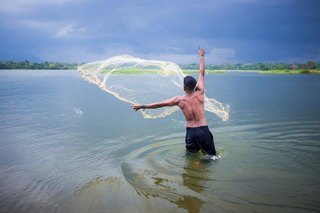 Likewise, the new, reliable water source has enabled his neighbour, the young farmer Nalaka, to return home for good. “I expect to earn more money and that I won’t have to return to Colombo,” he says while picking mangos with his two-year old son near their mud brick home. “I feel a sense of freedom as I can spend time with my children and family, rather than working for someone else,” he says.

Wasantha hopes that better ground water management will also help stem the growing rate of kidney disease in this part of the country. The cause remains unclear and to help find some answers he introduced a groundwater monitoring project, based on what he learnt during his studies in Australia. This involves village water management committees assisting local irrigation department officials in collecting, analysing and documenting water samples on a regular basis.

For now though, Wasantha is pleased by the dramatic changes he has witnessed in many villages like Elapontana.

“The education that I received was through public funds [both in Sri Lanka and Australia] and because I got so much from others, I feel compelled to give back,” he says. “I am doing that, and I see the success in doing that. And it really makes me happy.”

Hundreds of South Asian leaders are using the knowledge and connections they gained through Australia Awards Scholarships to make a difference back home. In Wasantha’s case, drawing on the ancient wisdom of his ancestors and blending this with new knowledge gained in Australia has meant that thousands of people have been able to improve their lives.